As of July this year, I will have been in the investment business 50 years.  The first 26 years were at Fort Wayne National Bank’s trust department and the last 24 at Monarch Capital.  A lot has happened over those 50 years, but by far there has been more positive than negative.  We have had 7 recessions and subsequent bear markets.  The longest recession was the most recent, at 18 months, while the shortest was 6 months.  The graph below shows the S&P 500 over the 50-year period.  The shaded areas are recessions. 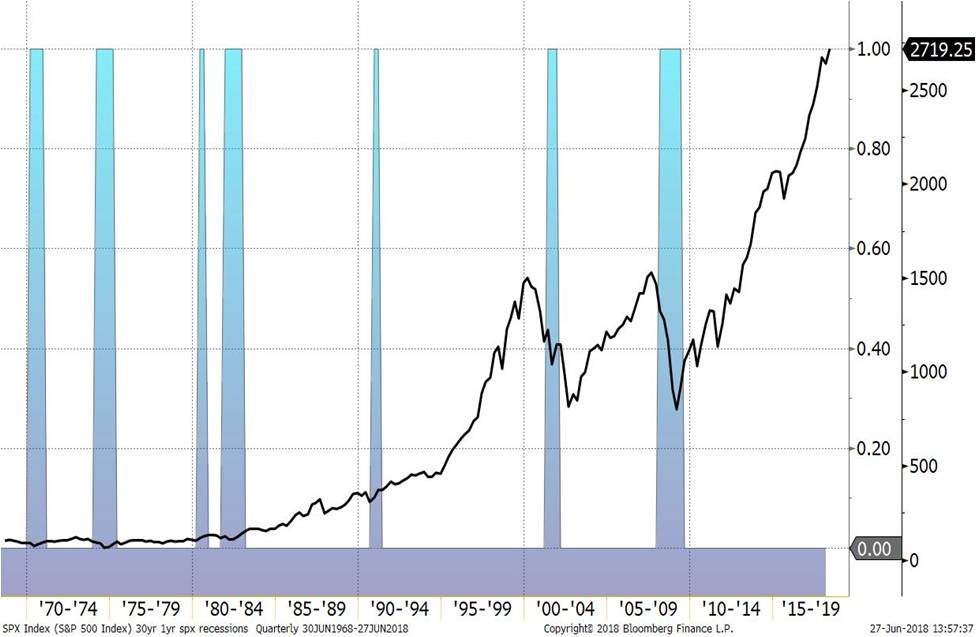 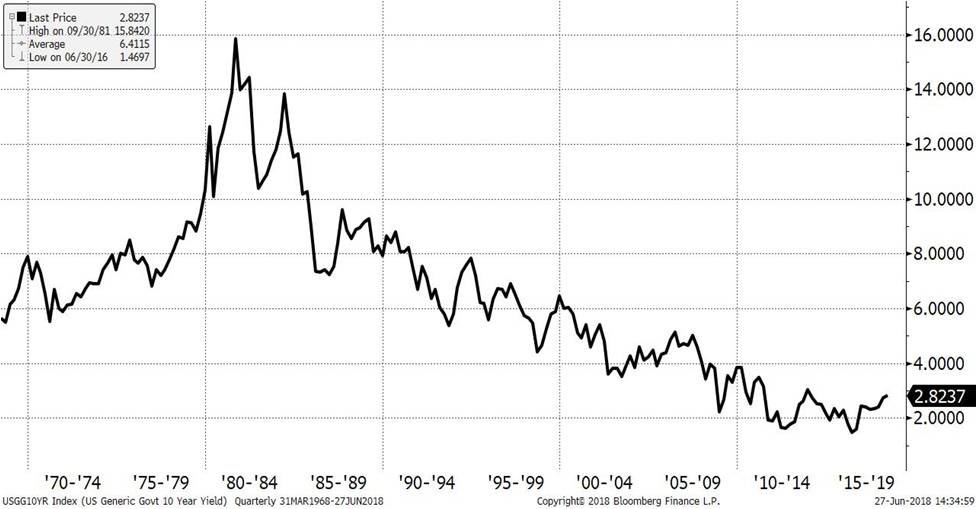 Our assumption is that interest rates have bottomed.  Is this the start of another 30-35 year cycle?  Only time will tell, but there are many (maybe most) investors who have never been in a rising interest rate environment.  In a declining interest rate environment, every time you buy a bond at par, it appreciates in value.  With rising rates, your bonds should decline in value as interest rates rise.  We normally purchase intermediate-term (5-10 years), high-quality bonds, which limits your downside risk as rates rise.  You do not want to be in long-term, low-quality bonds when rates are rising.

Chart 3 on the following page shows a couple data series that require an explanation.  The red line shows the steepness of the yield curve over time.  This is measured as the difference between the 10-year Treasury bond yield and the 1-year Treasury bond yield.  The blue line shows the real Fed Funds rate, which is the nominal Fed Funds rate less the inflation rate.  Nominal Fed Funds is the rate you hear on the news, like the Fed recently raised the rate to a range of 1.75% – 2%.  Subtract inflation of 1.8%, and the real rate is thus close to 0%. The gray columns signify recessions. 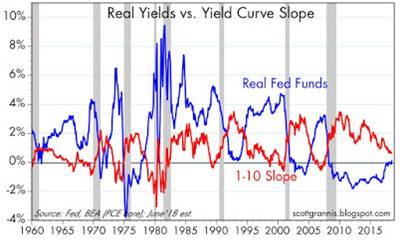 Notice that there is always a sharp rise in the real Fed Funds rate prior to a recession, and the yield curve slope drops below 0% (meaning it “inverts”).  In the past few years, the Fed has been raising short-term interest rates, while long-term bond yields have not risen as quickly.  As a result, the spread between the 10-year and 1-year is down to 0.56%.  It is anticipated the Fed will hike rates twice more in 2018, by 0.25% each time, and perhaps three more times in 2019.  If this happens and long-term rates do not increase, the yield curve will invert in 2019.

The good news is this is not unusual for a Fed tightening cycle.  Often it looks like an inversion is ahead, then long-term rates start to move up and the inversion is avoided.

After the 10%+ drop in early February this year, the stock market has traded in a tight range during the second quarter.  The wall of worry is not shrinking, but our companies are reporting good earnings and cash flow.  As earnings grow and stock prices are flat, the Price/Earnings ratio falls.  It has dropped to around 16 from 18 last year.  Not back-up-the-truck cheap, but not too overly optimistic.

It may be a hot, bumpy summer as President Trump stirs the international pot.  Some of the core stocks have been weak this year, namely the consumer staples and some of the industrial stocks.  While we aren’t happy about it, this happens every cycle.  The happy side of this is the outperformance which will eventually follow the underperformance.

We still believe 2018 will turn out to be a good year for the economy, and hopefully a decent year for the stock market.  On a side note, Monarch was just audited by the SEC.  All investment advisors are routinely audited on a periodic basis.  We are pleased to report that the SEC identified no deficiencies.  Compliance is a serious issue with the SEC, and so it is with us.

If there is anything you need, please let us know.