Thank you to everyone who joined us for lunch on Tuesday. It was nearly standing room only, with a crowd of 52! After introducing the group to our newest Monarchian, Stephanie, Dave took a straw poll to see how many folks wanted him to talk about the Fed. After 3 hands went up (one of which was his wife’s), he declared it unanimous and proceeded to catch everyone up on how the Fed is maneuvering these days with a solid economy, no acceleration in inflation, and a President who is jawboning him to stop raising rates. The ongoing correction in the stock market has often been attributed to the flattening yield curve, and what appeared to be a Fed chairman hell-bent on raising the Fed Funds rate to a “normalized” level, whatever that is; until he appeared to back off a couple weeks ago. While the stock market has stabilized since then, the yield curve is still pretty flat, except on the short-end, meaning that the market is giving Powell room to raise rates 1 or 2 times more, and that’s it. See chart below: 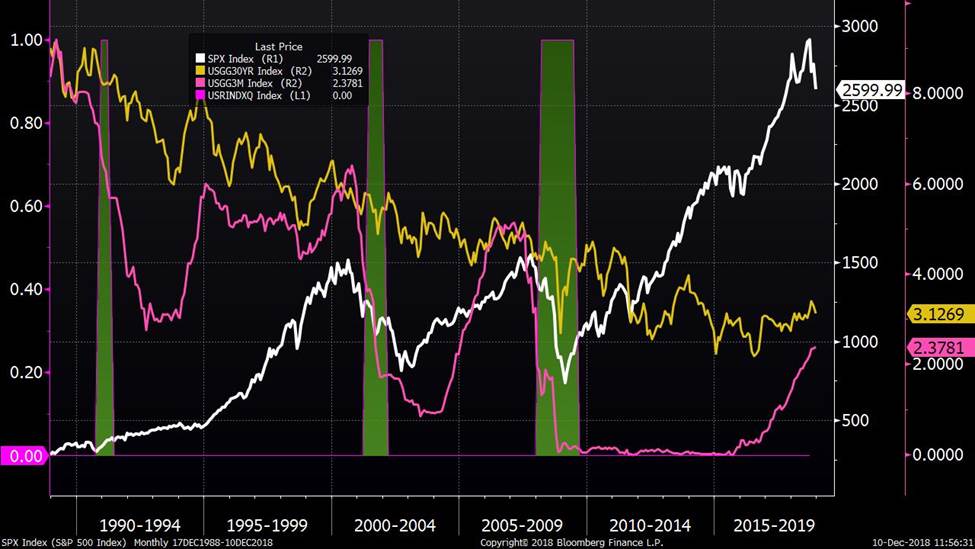 The white line is the S&P 500 (stock market). The yellow line is the 30-year treasury yield. The pink line is the 90-day treasury yield, which is a proxy for where the Fed Funds rate is going in the short-term. As you can see, there is still 0.75% between the two before the yield curve fully inverts, meaning that short-term rates are higher than long-term rates. That happened near the end of each of the last three cycles (and pretty much every cycle before that), as the chart shows; see: 1989, 2000, and 2006. Within 1-2 years, a recession has followed (green columns), leading to a drop in stock prices.

Another interesting observation from this chart is the recession of 1991, which lasted all of 2 quarters. The stock market was down for less than a year before hitting new highs in 1991. But for those of us who lived through that time, it felt a little rougher. As we remember George H.W. Bush over the last month, we remember that the recovery from this mini-recession was termed the “Jobless Recovery,” because companies didn’t immediately rehire laid-off employees. The Fed was so concerned that it continued to cut interest rates into 1992, by a whopping 6% from 1990-92! And it cost Bush his job. But why were jobs so slow to come back? The U.S. economy had changed in the 1980s—multinationals produced more globally, our economy became more of a service economy, and companies had more productivity-enhancing opportunities to substitute capital for labor. Jobs eventually were created, but new ones, as opposed to the old ones lost to the recession. The same thing has happened in the two recoveries since then.

John lathered up the crowd by sharing some spooky descriptions of the 2018 market: Worst Year Ever, Nowhere to Hide, Hunger Games (!?). The reason is that 90% of all financial asset classes have lost money this year. This includes almost all stock indices, in almost all countries in the world (the U.S. has done far better than the rest of the world), most bond markets (U.S., foreign, high-grade, junk) because interest rates have risen, gold, bitcoin, and hedge funds. Cash has been king. While stocks and bonds have only lost a few % on average, the fact that both stocks and bonds have lost money is unusual because generally when stocks are in a bear market, bonds perform very well. We would submit this will still be true in the next bear market; the correction this year has coincided with a strengthening economy, not a recession. But this 90% is still noteworthy because it is higher than any year since 1900, including every year in the Great Depression and Great Recession:

While cash has been king, Monarch’s core stocks have been even better, returning an average of +4.8% this year, through last Friday. That includes GE. The core stocks feature a number of safety stocks and health care stocks which have performed especially well this year, as the market has become so shaky since October. Many of our stocks (P&G, J&J, Coke, Abbott, McDonald’s, Merck) are hitting new highs this week, even as the market remains down 10% and the average stock is down more than 20% from its 52-week high. 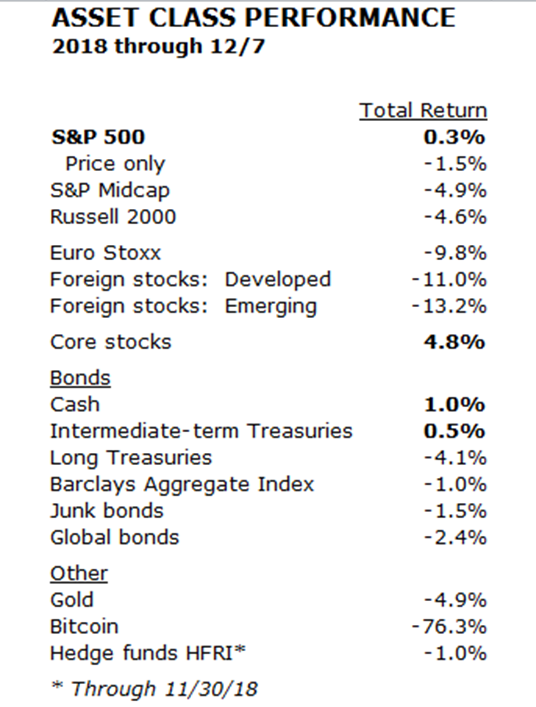 What’s the story on the economy? We are somewhere between amazed, befuddled, and dumbfounded that some investors are “getting out” of stocks now in advance of what they foresee as an imminent recession. This phenomenon has almost never happened before, that investors wanted to get out of stocks 1-2 years before a recession. Usually at this stage of the cycle, investors are declaring the business cycle dead and predicting there will never be another recession. This level of pessimism is consistent with this entire cycle, when investors have underowned stocks to their detriment.

Our opinion is that, at least, we don’t see a recession within the next year and probably at least 2. There is way too much pent-up demand by companies and consumers, and so much backlog in a number of industries. Layer onto that that personal income is growing 4-5% annually, with wage growth at nearly 3%, employment growth of 1-2%, and consumers will especially start noticing the tax rate cuts (namely the hike in the standard deduction) when they file taxes and get refunds next year. It is hard to envision these numbers changing much in the near future as businesses struggle so mightily to find employees to work. The one fly in the ointment remains the trade war, which impacts businesses directly in terms of sourcing, closed markets, and import prices. But more importantly, it impacts business confidence, which is needed to encourage businesses to not only continue to invest in the growth of their business, but invest more than they did the year before. Most economic cycles are dragged down by a drop in business spending. As it’s only 20% of the economy, though, with consumer spending at 70%, it would take a big drop in business spending, and a simultaneous drop in jobs, to dent consumer spending. Right now, business confidence is still high: 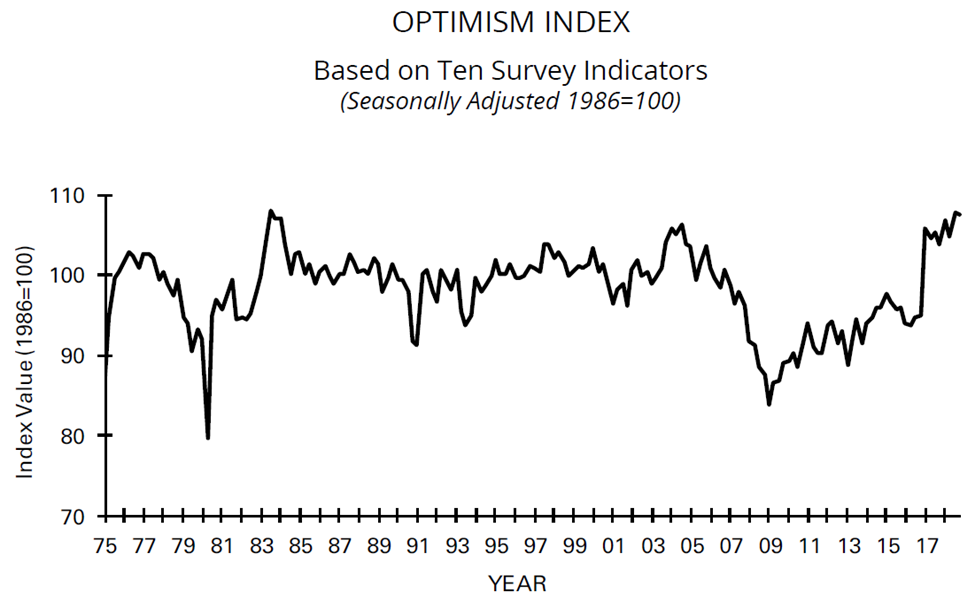 Although we are watching it like a hawk since business spending growth decelerated sharply in the 3rd quarter. The following chart shows contribution to GDP growth each quarter. Notice how consistently above 0% consumer spending has been, even in the 2001 recession.

Our top 10 list of “bull market top indicators” still shows no definitive evidence that we are near the top of the bull market. In the last 2 cycles, all 10 of these indicators were present. None are now, although 3 are question marks:

Finally, we are well aware that the calendar SHOULD be a tailwind to investors going forward. The 3rd year of a presidency is typically the best. Even better, the 12-month period following a mid-term election has been positive for stocks every year since 1950: 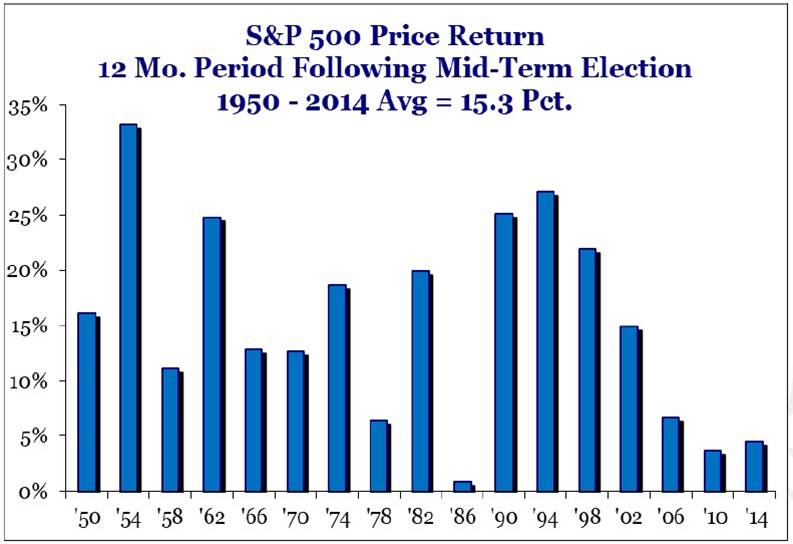 Not something to take to the bank, but tough to bet against, especially with a still-strong economy, and given that stocks are much cheaper and are still underloved.

George reminded everyone that they should ensure they have the correct primary and contingent beneficiaries set up for their IRAs. Too many painful stories (thankfully not with Monarch customers) out there.